HeroQuest, is an adventure board game that was published by Milton Bradley in conjunction with Games Workshop. The game was based around archetypes of fantasy role-playing games: the game itself was actually a simple game system, allowing the gamemaster (called "Morcar" in the original British version and most regional versions, but "Zargon" in the USA) to create dungeons of his or her own design using the provided game board, tiles, furnishings and monsters. The game borrows artwork and name elements that Games Workshop had developed for their Warhammer ranger of products.

The game consisted of a board and a number of individual miniatures and items. The protagonists were 4 heroes ("Barbarian", "Dwarf", "Elf" and "Wizard") who faced a selection of monsters: Orcs, Goblins, Fimir, Chaos Warriors, a Chaos Warlock (which is used to represent many of the named characters for the various quests), a Gargoyle (based on Daemon of Khorne) and a number of Undead — skeletons, zombies and mummies.

Several expansions were released, each adding new tiles, artefacts and monsters to the core system.

HeroQuest was designed by Stephen Baker, who worked for the UK division of Milton Bradley (MB). The card artwork was produced by Gary Chalk, the box artwork by Les Edwards and the miniatures sculpted by the Games Workshop Design Studio. The game was released in Britain, Europe and Australia around 1989. It was released in America and Canada in 1990 in a slightly modified version. In 1992, HeroQuest won the Origins Award for "Best Graphic Presentation of a Boardgame of 1991".

The game was sold through normal toy and game channels, rather than the Games Workshop specialist stores, and is cited by many gamers of the period as their "gateway" into fantasy miniatures gaming.

The four player characters offer a choice of gameplay. The Barbarian and Dwarf allow a more combat-oriented game, while the Wizard and Elf can cast spells. The artwork and miniatures of each character are standardized, but the equipment statistics vary somewhat from this basic portrait.

The game is played on a grid representing the interior of a dungeon or castle, with walls segmenting the grid into rooms and corridors. One player assumes the role of the evil wizard character (Morcar/Zargon), and uses a map taken from the game's quest book to determine how the quest is to be played. The map details the placement of monsters, artifacts, and doors, as well as the overall quest the other players are embarking upon. Quests vary and include scenarios such as escaping a dungeon, killing a particular character, or obtaining an artifact. The evil wizard first places the entry point on the map - usually a spiral staircase which the other players must ascend, although on some quests the players enter via an external door or begin in a specific room. The map may also specify a wandering monster. This is a monster that may enter the game if a player is unlucky while searching for treasure.

During a Hero's turn, the player can move before or after performing one of the following actions: attack, cast a spell, search for traps, or search for treasure.

Players roll two standard dice and may then move up to that number of squares. Players may move over a square occupied by another player if the occupying player grants permission, but may not occupy the same square. Doors, monsters and other objects are placed on the board by the evil wizard player according to line of sight. Once placed on the board they are not removed unless killed, thereby providing a steady stream of monsters for the evil wizard player to utilize.

Combat involves special dice bearing skulls and shields. The character players and the evil wizard player use the same dice, but the evil wizard player has a smaller chance of rolling his specific shield. The number of dice used is determined by the basic statistics of the player or monster, whether they are attacking or defending, plus any modifiers due to spells or items being carried. The dice have 3 skull sides, 2 'Hero' shield sides and 1 'monster/Zargon' shield side.

Spells can be cast by the elf and wizard characters, and some special monsters played by the evil wizard. Spells can be broadly split into offensive, defensive and passive varieties, and their use and effect varies greatly. Some must be played immediately before attacking or defending.

Searching for traps and secret doors

There are four kinds of traps in HeroQuest - pit traps, spear traps, chest traps, and occasionally falling rocks. Of these, only spear traps and chest traps do not appear on the board as they are activated only once and then they have no lingering effects. If a pit trap is not discovered and a player walks over it, they fall in and lose one body point. The pit will remain in play as a square that may be jumped over. A falling rocks trap will cause a rock slide tile to remain in play as a square that must now be navigated around, much like a wall. A quest may also contain secret doors which allow alternative routes to the objective or access to secret rooms containing treasure or monsters.

A player can only search for traps and secret doors in the room or corridor they are currently standing, and only if there are no monsters within the room or corridor. When this happens, the evil wizard character indicates where any traps may be and places secret door objects on the map. This allows players to move around, or attempt to jump over, traps without tripping them.

The dwarf is the only character that can disarm traps without the aid of the specialized kit which is either bought in the armory or found during certain quests.

In a similar manner, players can search a room for treasure if no monsters are in the room. On some quests, searching for treasure in certain rooms will yield a particularly valuable artifact. More likely, however, the quest will not have specified any treasure for the current location and instead a treasure card is taken. Out of the 25 Treasure Cards, 6 are Wandering Monster cards and 4 are Hazard Cards, making a total of 10 "bad" cards that get put back in the deck when discovered. There is also a chance that searching for treasure may trigger chest traps that were not disarmed, or cause monsters to attack, usually a Gargoyle already in the room that does not move at first and cannot be harmed until it does move or attacks a Hero.

The game ends when every player has either exited the board or been killed by the evil wizard. If the objective of the quest has not been accomplished then the evil wizard character wins. Items collected during the quest may be kept for future quests. The quests usually form part of a longer story, especially the quests which are part of the expansion packs.

Many expansions for the game were published, starting with Kellar's Keep, released in Europe and Australasia in 1989, and The United States & Canada in 1991. Kellar's Keep added new quests, new items and spells and a further batch of monster figures - more Orcs, Goblins and Fimir. Released shortly in the same years was Return of the Witch Lord which extended the undead with more skeletons, mummies and zombies.

In 1992, The United States and Canada saw the release of two sets of their own: The Frozen Horror, with a snow and ice theme, featured a lone "Female Barbarian", Mercenaries, Ice Gremlins, Polar Warbears and a pair of yeti as well as the "Frozen horror" of the title, while The Mage of the Mirror had an Elven theme: Female Elf against an evil Elven Archmage, Elf warriors and archers, Giant Wolves and Ogres.

A HeroQuest Adventure Design Kit was released in Europe in 1990, containing items to help HeroQuest players design their own quests, and an Adventure Design Booklet was published with 4 sheets of adhesive labels and with an 80-page pad of a new design, larger character sheet. There was also a blank quest map printed in the middle of the original game's quest booklet for creative players to make their own adventures. 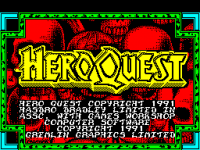 A computer game adaptation was released in 1991 by Gremlin Graphics Ltd.

A version of the game for the NES was developed to a prototype stage, but never released. The game was well recieved, Crash magazine giving the game a score of 95% [[1]] and Your Sinclair 86% [[2]].

Three HeroQuest novels were written by Dave Morris and published by Corgi Books.

The Fellowship of the Four
a 4 player gamebook
The Screaming Spectre
an adventure centring on the Wizard character, and containing a solo HeroQuest boardgame advenure: Running The Gauntlet
The Tyrant's Tomb
an adventure centring on the Barbarian character, and containing a HeroQuest boardgame adventure: A Growl of Thunder

In November 2013 Gamezone Miniatures launched a crowd-funding campaign to produce a 25th Anniversary edition of the game, using all new artwork.