Dark Future is a 1988 miniature wargame by Games Workshop based around automobile combat.

It is set in an alternate reality where the United States — and indeed the rest of the world—is falling apart. Society is going to ruins, and the natural laws of physics are breaking down. The megacorps rule, technology runs rampant, and Sanctioned Ops patrol the roads and highways tracking down and destroying the renegade scum who live there, outside of the law and doing what they please.

In the board game, the player plays the part of a Sanctioned Op—a bounty hunter of the future—or a Renegade, duelling for survival in high-tech vehicles.

A game bearing the name Dark Future was originally developed for Games Workshop as a cyberpunk role-playing game. When that project was canceled, that game's co-author and GW board game developer Marc Gascoigne ported it onto Richard Halliwell's car-racing game system, provisionally titled Highway Warriors, using mechanics originally developed for Judge Dredd role-playing expansion Slaughter Margin. The game was seen as a replacement for GW's earlier board game Battlecars (designed by Ian Livingstone), which merged James Bond-like combative car gadgets in a Mad Max-inspired background, and competitor with the long-standing and popular Car Wars game by SJG.

Published in 1988 Dark Future was a boxed game containing rules, cardboard track sections and plastic cars a similar size to standard Matchbox toy cars (roughly 1/60 or 1/64 - 23 to 25mm scale), published by Games Workshop . The cover was painted by Les Edwards and the original may be seen here [1]

The game is reviewed by Jim Bambra in Dragon Magazine 149 - he berates the use of "roleplaying" in the title, stating that it really a board-game, but praises the high quality components and the fast-playing highway combat rules. 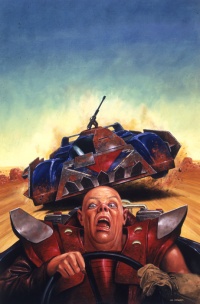 White Line Fever is a volume of advanced rules for Dark Future published in 1988.

The book collects many of the articles published in White Dwarf magazine. Containing new rules for manoeuvers, shooting, hazards, new equipment and vehicles are presented (trikes), alongside scenarios, and new characters. Black and white illustrations throughout.

Novels by Jack Yeovil (a pen name of Kim Newman) created an elaborate alternate history where Elvis Presley is a hard-as-nails bounty hunter and Oliver North is president of the United States. In 2005 the Dark Future setting was brought back as a series of novels published by Games Workshop's fiction imprint Black Flame. They updated the setting to 2021, and released several new titles. However, while several pop-culture references were updated in the books, some lines retain their original wording, and now seem out of place (such as when character Jazzbeaux thinks of the millennium coming around in five years' time in 'Route 666').

The final book of the "Demon Download Cycle", United States Calvary [sic], was promised in the back of Comeback Tour but never produced. The finished manuscript to Violent Tendency by Eugene Byrne was lost when the writer's Amstrad PCW died.

The world of Dark Future, as detailed by Yeovil/Newman in the Dark Future novels, played with multiple sci-fi, horror, and dystopia clichés while mixing in alternate history and homages & cameos to other fiction (Instead of becoming US president actor Ronald Reagan starred in the TV series Get Smart, famous film murderers like Jason Voorhees are asylum inmates in Krokodil Tears, Leonard Nimoy is named as a 60s astronaut in Comeback Tour). The world has undergone severe social, environmental, and moral decline, combined with a dramatic rise in technology; in 1995, violence is the main killer.

In the Demon Download Cycle books, the main antagonist is Elder Nguyen Seth, the ageless Summoner of the Great Old Ones, who is trying to bring about the end of the world. As of the late 1990s, he's doing this as leader of the Brethren of Joseph (which he himself brought about in 1843) and clashes with the various protagonists. As well as causing blood sacrifices to his masters, he sacrifices the potential of artists and thinkers - including Edgar Allan Poe, H.P. Lovecraft, the Marquis de Sade, and Elvis (via Colonel Tom Parker) - after showing them a brief glimpse of the Old Ones, corrupting them. Route 666 has Seth responsible for the bizarre circumstances of Poe's death, and revealed he tried and failed to sacrifice Elvis as well (meaning the real-life shape of Elvis' career after 1960).

The main point of divergence in this timeline was the 1960 Presidential election - here, John F. Kennedy was caught in an affair with Marilyn Monroe, crippling his support and giving Richard Nixon the Presidency. The Solid Sixties were seen as a golden age of peace, stability and decent moral values in America, under a popular President. Legal restrictions were removed from businesses, allowing for both technological advancement and ending regulations against pollution. Racial strife was considered to be ended by the Separate But Equal laws; the influence this had on culture included a Lieutenant O'Hara in Star Trek and James M. Hendrix and his Merry Minstrels performing big-band music.

Thanks to the increased pollution, drastic climate change and damage to mid-western water supplies would cause most of America to become desert ("the Des") from the 70s onwards. Violent dystopian gangcults - the Maniax, the Psychopomps, and the Confederate Air Force being central to the books - would rise to prominence. In 1985, to control the increasing violence, the Enderby Amendment opened up law enforcement to private groups and individuals: the Sanctioned Ops, the most famous being Turner-Harvest-Ramirez Agency and their star agent Rachel "Redd" Harvest. President Heston would also bring in the Moral Re-Armament Drive and recreate the United States Road Cavalry, a heavily armed Mad Max-style group garbed like the original Cavalry, to patrol the roadways and interstates.

By the near future of 1995, the major cities have for been split between Policed Zones and the lawless NoGos for over a decade; several of the southern states have re-legalised slavery under the term "indentured labour"; New York has a wall to keep out rising flood waters, while New Orleans is succumbing to floods. The North government is bankrupt, thanks to the (deliberately) disastrous policies of free-market economist Ottakar Proktor, secretly a serial killer. Utah, a completely abandoned and dead area, has been sold to the sinister Brethren of Joseph, a religious group formed in the 19th Century, who have reclaimed the dead land and renamed it Deseret.

The Catholic Church was drastically changed when Nelson Mandela became Pope in the 1970s. Increased liberalisations were introduced out of necessity - same-sex marriage, use of contraception, end to celibacy, and nuns given the same status as priests - and the Vatican became politically involved (both diplomatically and militarily) in conflicts where a Good and Evil side could be identified. Thanks to Vatican negotiations, US involvement in Central America was ended in the 70s. The Church maintains major computer systems and intelligence networks, and is involved in many covert actions, including against the Josephites.

Large amounts of power belong in the hands of corporations, mainly the "JapCorps" like GenTech, who can manipulate major governments. GenTech even has a neutrality treaty with the United States in case of "corporate war" with the Soviet Union, and is able to get away with organ harvesting in the Third World.

A stronger Argentina won a decisive victory over Britain in the Malvinas War, using GenTech and G-Mek weaponry. Britain, already a more insular and conservative nation at the time, became a depressed and failing state, to the point of selling off the modern London Bridge for cash; Ian Paisley was Prime Minister until he suffered a heart attack after the loss of Port Stanley; Jeffrey Archer has been the leader since, carrying out heavy rationing and implied dictatorial actions, with John Lennon the head of the Labour Party. In place of the Bay of Pigs, there was a major American invasion of Cuba that saw Castro outed. Continental Europe has been unified into the United European Community under President LePen, with numerous insurrectionist clashes; Sicily is now a prison camp. Japan is home to the ultranationalist Blood Banner Society.

Since the seventies, the states of Central American have been unified into the socialist Central American Confederation, which has stopped exporting coffee. Mexico has collapsed into permanent civil war. The Middle East is dominated by the Pan-Islamic Congress, a union of states, and "liberated" Albania, Greece, Macedonia, and Kosovo. Global warming has melted much of Antarctica, leaving it open to mining interests; Argentina controls most of it. The Vietnam War took place with the Soviet Union in America's place and China pouring in to Indochina, while many young Russians fled to Finland to avoid the draft; the USSR lost to North Vietnam, but not after devastating its ally China in the Nine-Minute War nuclear exchange. The war led to China descending into feudal states, while the Soviet Union suffered major social unrest from its youths and the loss of territory to Japan & the Pan-Islamics. The end result was Yuri Andropov's coup in 1973, which led to the USSR becoming a more democratic and peaceful state with greater freedoms.

Nixon's Presidency saw NASA given more funding and support while being heavily chased for results; the Moon was landed on in 1965 at the cost of many dead astronauts. Nixon's legacy was the Needlepoint System of laser satellites, which proved so costly and difficult to produce that they led to the Spiro administration shutting down NASA in 1978. Cape Canaveral was abandoned to the swamp. The Soviet space program ended when Yuri Gagarin was killed in his first space flight and the cost of the Vietnam War prevented them from recovering.

Rock and roll music collapsed after New Year's Day 1961, when Reverend Jimmy Swaggart led a march against a Madison Square Garden rock festival; the three-day Rock and Roll Riots left many major stars dead or crippled, and Nixon branded the music as a severe moral threat, leading to moral standards being placed on the American industry. More 'moral' music like Pat Boone and the "English Invasion" - Ken Dodd, Matt Monro, and Valerie Singleton - took over. Britain is still dominated by this type of music, with groups like the John Lydon Band and their patriotic hit God Save the Queen. Russian "Sovrock", inspired by bootleg tapes of rock music, would take prominence and lead the USSR to cultural dominance, with singers like Andrei Tarkovsky becoming international stars. As a result, Elvis Presley rejoined the army in 1961 and remained there until 1989, then leaving to become a Sanctioned Op defending the Deep South; very few people outside of the USSR and Japan remember his music career, while Elvis has a recurring nightmare of himself an obese self-parody of his former self, unable to remember the music. The Beatles never formed; years later, when Elvis was bodyguarding John Lennon MP, Lennon would remark that he might've stayed with music if Elvis had not retired (a twist on their real-life meeting).

The main news service, used in the novels to deliver exposition and world-building, is ZeeBeeCee (a pun on BBC), a GenTech group. It will occasionally divert from reporting stories to 'reporting' how pollution has been found not to have killed off the whales or how indentured labourers are not slaves.

The possibility of a Dark-Future themed paintball venue and LARP was muted in the editorials of White Dwarf magazine, but did not progress beyond an initial research phase in the game design studio.

In 1992 Games Workshop / Boxtree sued the publishers Bantam / Transworld for trademark infringement. The latter had begun to produce a young-adult science-fiction series called Dark Future by the author Laurence James, Games Workshop sought and won an injunction. Transworld were instructed to recall the books and had to pay £60,000 in costs.

The original game had already gone out-of print, and the litigation was seen as heavy handed by many in sci-fi fandom. For more details see Dave Langfords newsletters Ansible 66 and Ansible 67